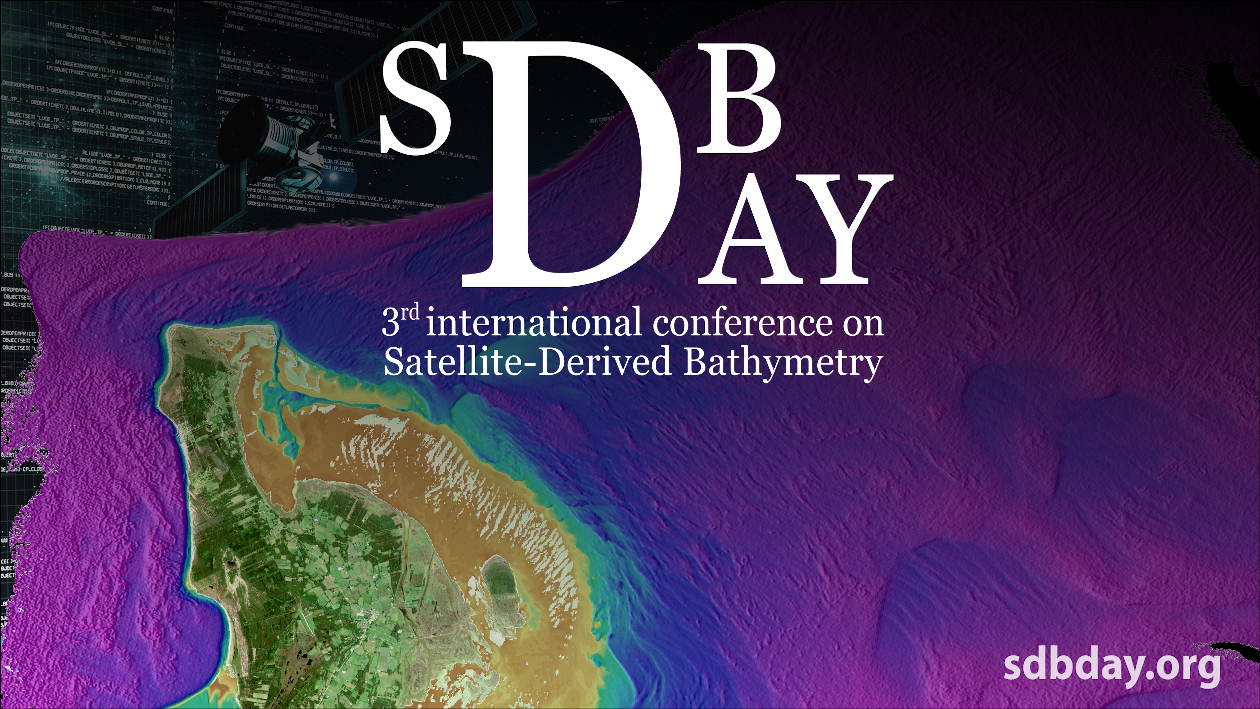 “We thought it would not be easy to engage people for a virtual SDB Day event. We were wrong! The SDB Day 2021 was very well attended from all over the world and resulted in great discussions and precise follow-up actions!” said Philip Klinger on behalf of the SDB Day organisation team.

For the third time, experts and stakeholders of the Satellite-Derived Bathymetry (SDB) have met and exchanged their thoughts, solutions and applications. The conference was initiated in 2018 as the exchange forum for international SDB stakeholders which required a forum to discuss and present on SDB. The inaugural SDB Day 2018 took place in the Lake District of Bavaria, Germany, and offered a unique opportunity to discuss on capabilities, data integration, requirements and quality standards. The 2nd SDB Day 2019 and took place at the Sunshine Coast’s Mooloolaba Beach in Australia with great participation of the Oceania region. Due to the pandemic this year’s event, the 3rd SDB Day 2021 was held virtually. It was separated into two events, one for the Americas, Caribbean and Europe time zone (on 27th Jan 2021) and one for the Asia and Oceania time zone (on 10th Feb 2021). This virtual format allowed for many of the SDB stakeholders to join the meeting. In total, 250 participants from more than 30 countries joined the two virtual events!

Impressive keynote talks were given by Commander Waterson of the Royal Australian Navy and Captain Yanuar Handwiono of Pushidrosal. Both keynotes provided excellent showcases of how Satellite-Derived Bathymetry data and SDB software are being used for applications, ranging from reconnaissance survey to charting to environmental mapping.

“The growing demand of the bathymetric data for manifold maritime applications have increased dramatically in the past decade and Satellite-Derived Bathymetry became a choice which give a lower cost method compared to the conventional methods.” said the keynote Captain Yanuar Handwiono of Pushidrosal. He concluded that “The usage of SDB data is giving wider coverage and opportunity to analyse and identify shoal area, navigational hazard, obstruction, especially in making comparison between data of the previous survey”.

“Our initial experience of playing with SDB was a very steep learning curve. It wasn’t just as simple as acquiring an image and pressing start. Image quality, cloud, turbidity, satellite geometry all played a part and frustrated some of our early efforts. It became the case, that we could spend days of searching for a good image, and only for a few hours of process. […] Now, I’m pretty sure some of us thought in those days, that commercial acquisition of SDB data was much easier than doing the work for ourselves but that was also a trigger for us. We liked what we thought could be done with the Watcor-X software package and decided that we wanted to have his package for ourselves so that we could do our own SDB. […] We became first organisation in the world to acquired Watcor-X license. Being the first customer for anything could go one or two ways and I’m pleased to say, that our experience is being positive. We worked very closely with EOMAP to ensure the software package we were using worked the way we wanted […] The more we played with the data and technology, the more we learned about the potential of SDB.” said Commander Waterson of the Royal Australian Navy.

The conference included three sessions: session 1 included presentations about SDB technology and applications, session 2 provided insight into the SDB software such as Watcor-X and eolytics SDB as well as a range of helpful SDB software tools and session 3 addressed the topics of standards and best practice.

“As I go back as early adopter there was a reaction ten years ago of why do you need satellite bathymetry? Now, there’s a huge recognition of the need for this because of remote areas because of rapid response, and it is working. People are putting it to use, but I think the middle point is captured on making people confident in the products they are getting and that I think will really push it over”. Richard Stump (NOAA) after being asked on where SDB technology stands now.

“In the end we have a lot of benefits from our side. So SDB is low costs in comparison to applying a diver, its global coverage is available, it’s also accessible to remote locations, it’s easy to process and also reduces HSE risks” commented Stephen Rump (Fugro Germany) on the use SDB for the application of surveying cable landing sites.

The SDB software which both of the entities of the key note speakers make us of – EOMAP’s Watcor-X – was introduced in an online workshop by Christian Bödinger. Unique features of this tool are the traceability of the data analytics which is enabled by the physics based SDB concept. This approach does not rely on empirical fits and allows the calculation of depth without on-site data, together with the ability to perform multi-image analytics in order to reduce vertical uncertainties.

“We are convinced that SDB offers an interesting potential for feature detection and for the retrieval of mean depth but now our main question is to what extent can we improve the assessment of uncertainties” described Sophie Loyer, of how SHOM would like to see future SDB developments. An online poll which was held during the conference, strengthened this fact, with about 2/3 of all participants seeing this as important future development. Furthermore, about 60% of the participants identified a need to work on best practice and standards for SDB, towards which about half of them were interested to contribute. Following this high interest, it was decided to initiate a ‘Satellite-Derived Bathymetry best practice group”. All interested participants could register to participate in this group. To date, approximately two dozen researchers, developers and users of SDB have signed up, following the two virtual SDB Day events. The working group Kick-Off, which aims to define the objectives and roadmap, was scheduled for end of April 2021.

The SDB Day conferences are organised and co-sponsored by EOMAP. EOMAP provides innovations in aquatic Earth Observation services since 2006. Satellite-Derived Bathymetry is one of its key developments which is offered as data service and as online and desktop SDB software packages (Watcor-X, Litecor-X and eoLytics SDB) and tools to support image identification (eoLytics SWIFT). Among many other activities, EOMAP leads the European innovation project 4S, which was briefly described in one of the talks. It is the joint European innovation project formed by EOMAP (DE), CNR-ISMAR (IT), Fugro (DE), Smith&Warner (JM), HCMR (GR), QPS (NL) and Instituto Hidrográfico (PT), with the aim of further improving the Earth Observation solutions for seafloor mapping. For information on the project and for information on SDB software or technology, please contact Dr. Knut Hartmann (hartmann@eomap.de).

During the SDB Day Asia and Oceania, Fajar Adi announced the foundation of EOMAP Indonesia of which CEO he is representing by now. “by becoming a 100% local entity […] I believe EOMAP Indonesia can cater the requirements of SDB data and deliver solution in a better way.”

The recordings of the two virtual SDB Day events are accessible free of charge at SDBDAY.org. Contact to the SDB Day team: organisation@sdbday.org

“Listening the information shared and exchange towards this day […] got me more and more optimistic about the ground-breaking stage which we are about to initiate. “ said Fajar Adi.